How To: Change Passphrase for SSH Private Key 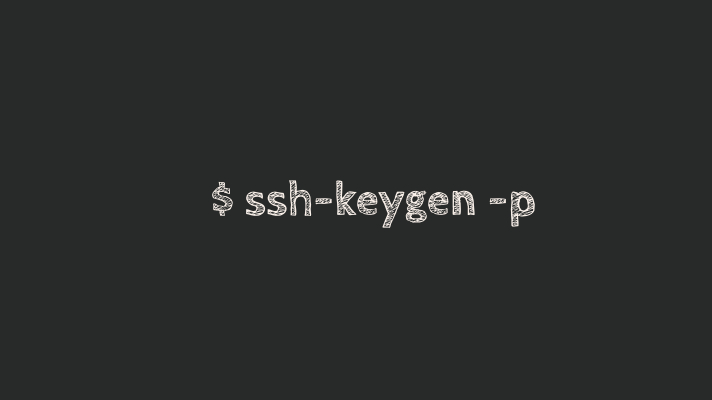 If you need to change or add a passphrase to your existing SSH private key just use ssh-keygen, the same tool which creates the key in the first place. Add the -p option to specify you want to change an existing private key’s passphrase instead of creating a new private key.

Here’s the simplest version of this command, resulting in changing the passphrase of the current user’s private key, stored in ~/.ssh/.

As you can see, you’re asked to confirm the location of the SSH key file, they asked for old passphrase and asked twice for the new passphrase:

If you have your key elsewhere or have multiple SSH keys, use the -f option followed by the path to the key file:

If you have an existing passphrase ssh-keygen will first ask you to enter that before allowing you to set the new passphrase, and if you haven’t had a passphrase before then it will just allow you to set one.

Sometimes you have unenrypted SSH private keys. That’s a very bad practice, so you should use ssh-keygen -p to encrypt them as soon as possible.

When we encrypt SSH keys, the risk of SSH key stolen remains the same (still just as easy to copy id_rsa file), but the likelihood of it actually being used is minimised because the key will be encrypted with the passphrase that only you know.

When the SSH key isn’t encrypted, ssh-keygen -p command will not ask for the old passphrase:

Removing passphrase from an SSH key

As bad a practice as it is, removing passphrase protection and encryption from a private SSH key is sometimes necessary, usually when you need to export/import your key into a different keystore.

Use ssh-keygen -p command to remove the passphrase – just press Enter when asked for the new passphrase without typing any phrase.

No Way To Recover Forgotten Passphrase

IMPORTANT: you cannot overwrite a forgotten passphrase. If your SSH key is encrypted, you must have the original passphrase to decrypt the key and save it with the new passphrase. If passphrase is lost, you can’t decript the key so access to it is lost until you recover the passphrase.

Here’s how it will look if you type wrong passphrase:

Syslog and ASL in macOS

How To: Change Crontab Editor in macOS